Iceland is a country located in the North Atlantic Ocean, with Reykjavik being its capital city. It has an incredibly varied landscape consisting of volcanoes, geysers, glaciers, hot springs and lava fields among others. Iceland experiences a cool, temperate maritime climate, with cooler summers and winters. A unique feature of this country is that daylight can last well into the night in the summer months.

Many tourists are drawn to Iceland due to its stunning natural scenery and landscapes. One of the top tourist attractions in the country is the aurora borealis, or the northern lights, which can typically be seen during winter outside the city. The country’s nickname of ‘the Land of Ice and Fire’ gives another hint as to why tourists are so eager to visit- many want to see the fascinating combination of glaciers and volcanoes that adorn the land.

Iceland is a great destination for every type of traveller to visit. There’s plenty for families to do and see, such as whale watching tours and horse-riding. Couples will love a trip to the hot springs and geothermal pools, while solo travellers will enjoy the array of tours available in the country which will allow them to visit all of the must-see destinations Iceland has to offer.

Flights depart from Dublin to Reykjavik Keflavik Nas with Icelandair regularly. The estimated flight time is around 2 hours 45 minutes. It is approximately a 45 minute drive from the airport into Reykjavik city centre.

To learn more about things to do in Iceland, the best time to go and local info see here.

Places to Stay in Iceland 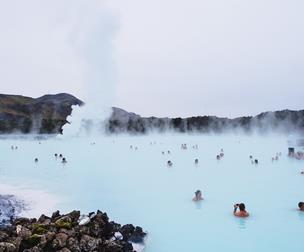 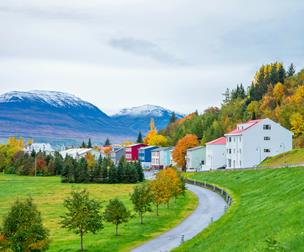 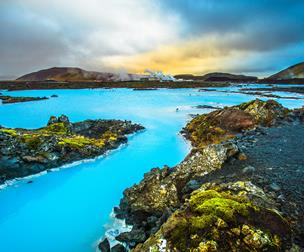 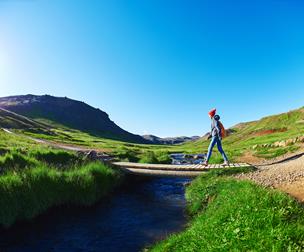 Things to do in Iceland

Nightlife isn’t typically the first thing that springs to mind when people think of Iceland, but Reykjavik is actually home to a number of bars that are perfect for enjoying an evening drink in. One of the most popular spots for a night out in Reykjavik is Laugavegur as it is filled with restaurants and bars, some of which are even themed!

Much of Icelandic cuisine consists of fresh produce that has been grown locally in geothermal greenhouses around the country. Fish and meat dishes are very popular in Iceland, in particular lamb and various white fish. There is a great range of restaurants in Iceland, from fine-dining establishments to more budget friendly options so there’s something to suit everyone’s tastes and budget.

Iceland is a great destination for a fun and educational holiday. There are many tours available which will take you around to show you the sights and areas of natural beauty, while also teaching you about how they came to be formed and about the country in general. Kids will love the whale and puffin watching tours in particular, which allows them to see these amazing animals up close in a safe and humane way. The puffin tours have an age limit of 10 years old, but if your child is too young there’s still a chance to see puffins around the South Coast and the Westfjords.

While Iceland is not the destination for a traditional beach holiday, a visit to one of Iceland’s black beaches is a must. These are black sand beaches surrounded by cliffs made of black basalt where the Atlantic Ocean washes ashore with great force and the wind is extremely powerful. Reynisfjara beach in particular has become a popular tourist destination not only because of its beauty, but also due to it being featured in many movies and TV shows including Game of Thrones and Star Wars.

The majority of major shopping destinations in Iceland can be found in Reykjavik, where the main street Laugavegur can be found. This street is lined with boutiques and various other stores where a range of goods can be bought. If you’re looking for authentic Icelandic goods, smaller shops can be found hidden throughout the country such as Thorvaldsens Bazar, Reykjavik’s oldest shop, where you can buy goods such as handicrafts.

Taking place annually in late February/early March, the Food and Fun Festival sees chefs come from all over the world to Reykjavik to make tasty dishes out of Icelandic ingredients, which are then sold in some of the finest restaurants in the city for a set price.

The best time to visit Iceland depends on what you want to do on your holiday. If you want to see the northern lights, its recommended that you visit during winter, between February and March or September and October in particular. Just be prepared to wrap up warm, as temperatures are often freezing – sometimes reaching as low as –30*C! In June and July temperatures will be warmer, and visitors could get to experience the midnight sun, when the sun doesn’t set until 12am and rises again around 3am.

The currency used in Iceland is the Icelandic krona.

There is no time difference between Ireland and Iceland.

Many tourists choose to rent a car on their holiday to Iceland as this gives them the freedom to go wherever they want when they want. Taking the bus is also a viable option, with a number of companies offering bus tours around the whole country.